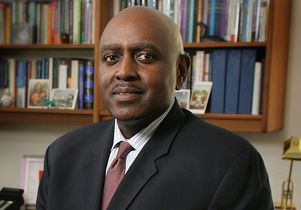 The National Institute of Dental and Craniofacial Research selected UCLA associate vice provost for student diversity Charles Alexander as a contributor for the 2020 Surgeon General’s Report on Oral Health.

The report will document key issues, progress, challenges and opportunities in oral health in the United States. It is commissioned by the U.S. Department of Health and Human Services, the Office of the Surgeon General, the National Institutes of Health (NIH), and the U.S. Public Health Service’s Oral Health Coordinating Committee.

Kathryn Atchison, professor in the UCLA School of Dentistry’s Division of Public Health and Community Dentistry, is serving as a section editor on the report and invited Alexander to join the team that is contributing a section titled Oral Health Integration, Workforce and Practice. He will submit material and text on “Pipeline Programs to Increase Underrepresented Minorities in Dental Schools.”

The last Surgeon General’s report on oral health was published in 2000, and “generated a lot of buzz in dentistry,” Alexander said. The report’s findings led to millions of dollars being pumped into efforts to improve recruitment and diversity in the field, access to care, and curriculum reform. Now, 20 years later, the goal of the new report is to see if these efforts had a lasting impact.

“In 2000, less than four percent of dental practitioners were African American, five percent were Latino and less than one percent were Native American,” Alexander said. “How far have we come?”

Alexander has long been a champion for pipeline programs and increasing diversity in dental schools. He is currently an associate adjunct professor in the UCLA School of Dentistry and previously served as an associate dean for admissions and student affairs at UC San Francisco, where he directed the Dental Careers program.

“I’m excited to contribute to this important document that is evidence-based and that heightens the issue to create more diversity in the dental profession,” Alexander said.

From LA’s ‘Jungle’ to the forefront of cancer research in...